There’s an old saying around these parts that goes, “If you can ski everything on Baldy, you can ski anywhere.”

It’s one of the big reasons Sun Valley has such a long and distinguished history for being home to some of the best and most decorated skiers and boarders to ever hit the snow. And it’s why Sun Valley has long attracted alpine enthusiasts from Seattle to South America, from Austria to Australia.

Baldy’s ability to produce and attract top notch skiers and riders is also undoubtedly one of the reasons why Sun Valley Heli Ski (SVHS) has been in business for nearly 50 years now—that and their unique ability to access some of the best backcountry skiing on the planet. 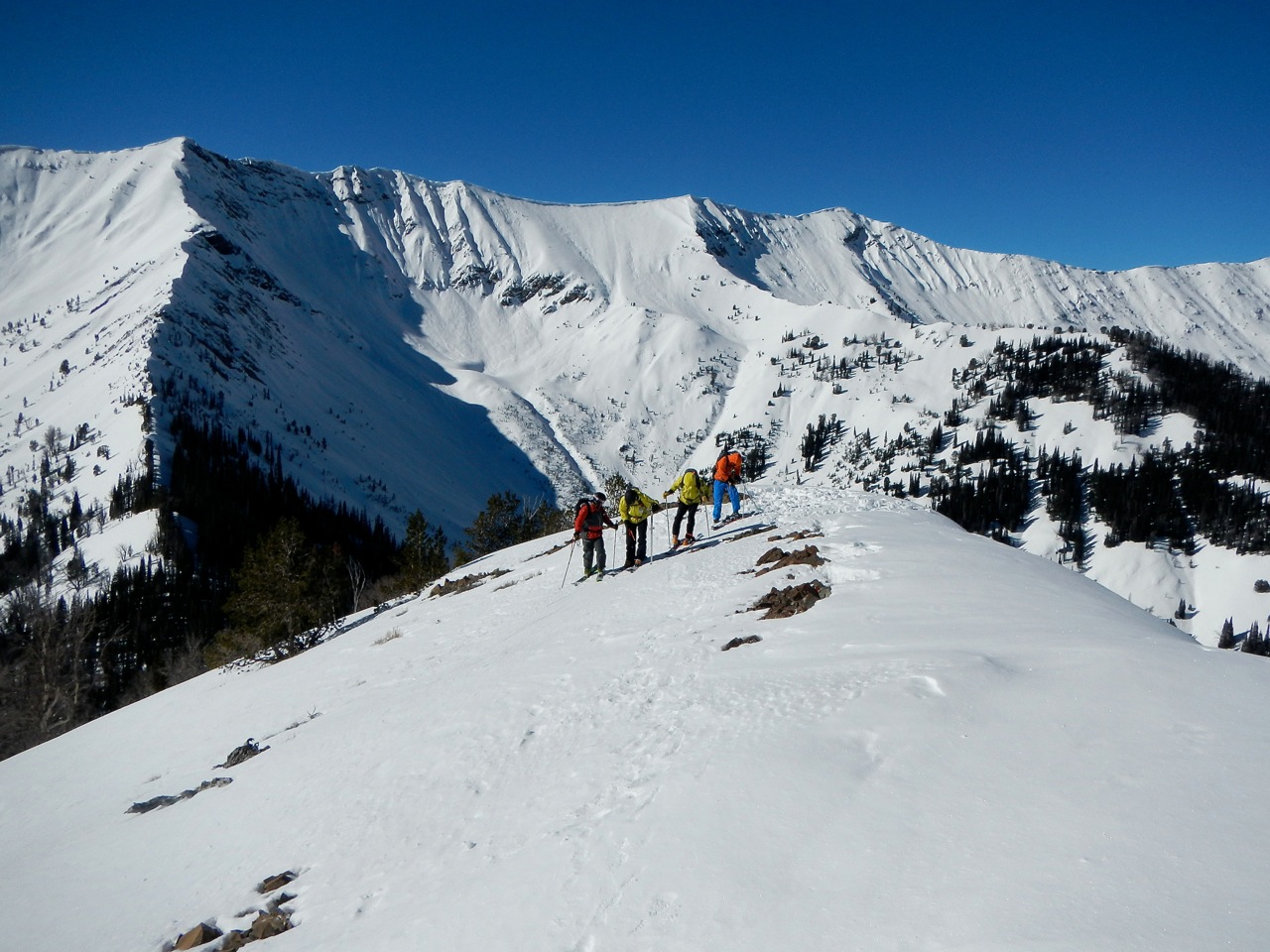 While most folks know that Sun Valley is America’s original ski resort, as well as the birthplace of the world’s first chairlift, Sun Valley also has another lesser known, but still rather impressive, claim to fame. It is also home of the first heli-skiing in the U.S.

Inspired by a trip to Canada, and by the snow-covered Idaho wilderness that surrounded Sun Valley, Bill Janss, who was then the owner of Sun Valley and an avid backcountry skier, founded Sun Valley Heli Ski in 1966.

SVHS was issued the first U.S. Forest Service heli ski permit and is still lucky enough to lay claim to the largest permit in the lower 48 states. Their skiable terrain includes three ranges (Smoky, Boulder and Pioneer mountains) and covers more than 750,000 acres. 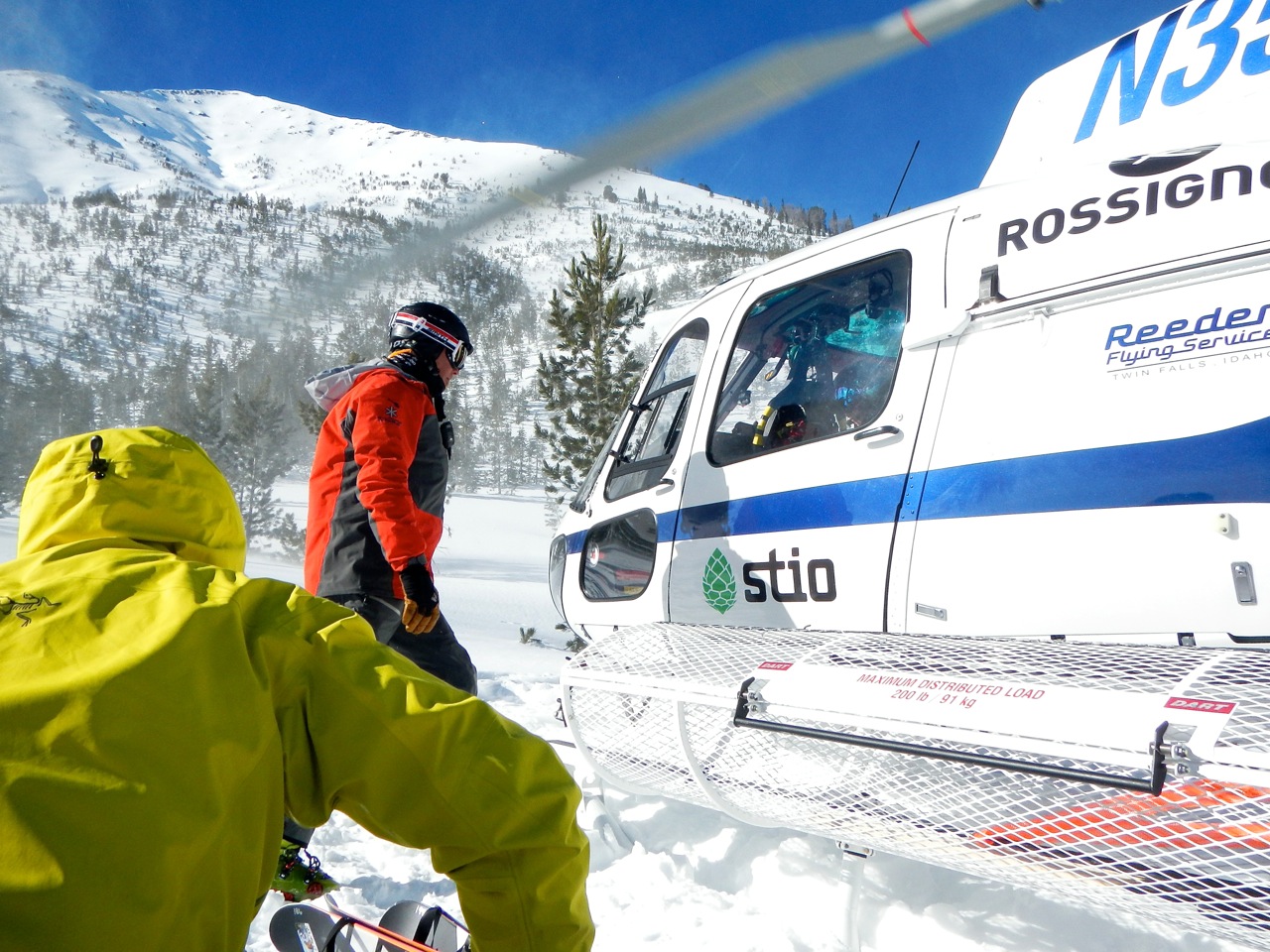 “We go to some pretty incredibly beautiful country,” said Pat Deal, SVHS’s lead guide, as he gave a group of us the mandatory pre-ski safety talk in their office at the base of Warm Springs. “You’re going to enjoy it.”

“Nothing beats heli-skiing,” said Dylan H., as we got ready to head over to the helicopter, which was taking off from the Sun Valley Gun Club.

Dylan and his brother, Travis, are in their mid-twenties and seasoned heli-skiers. But not as well-seasoned as their dad, Paul, who was the fourth member of our group and usually ran sweep. He estimated he’d been heli-skiing about 60 times. The whole family lives in the greater Seattle area and has proudly been skiing at Sun Valley for about a half-century.

Our guide was one of Sun Valley’s most accomplished skiers, two-time X Games champion and decade-long member of the U.S. Ski Team, the legendary Reggie Crist. After going through an avalanche beacon drill, we loaded up onto the “ship.” 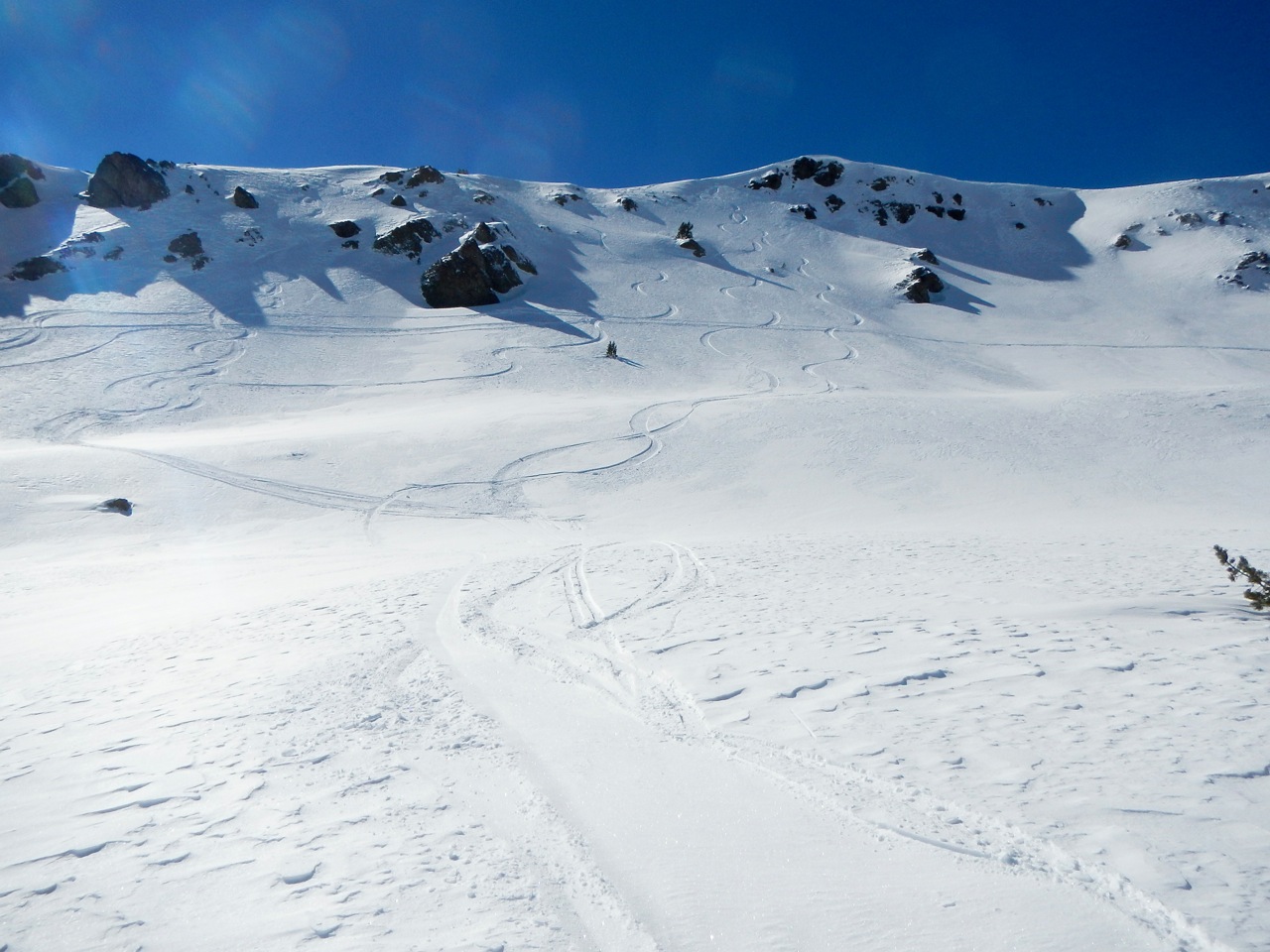 We were the third of three groups to take off towards Trail Creek under clear but chilly bluebird skies. In short order, the chopper settled down upon a steep ridge. Just a few moments after take off, we were all geared up and ready to drop in.

All my fellow skiers (I was the lone snowboarder in that group), including our guide, had been on Baldy the day before to warm up, which is always a good move before heli-skiing. The snow on our backcountry adventure was a bit inconsistent on that first run, as well as all our subsequent runs—especially for those used to Baldy and Dollar’s usual perfection. But there were still plenty of sweet spots, as all five of us floated through fresh tracks on every run.

“When you hit it just right, nothing is better,” Travis said. “It’s about being out in the wilderness, getting the guides to show you their backyard. It’s about being with other people, your family and friends, who share your passion for skiing.” 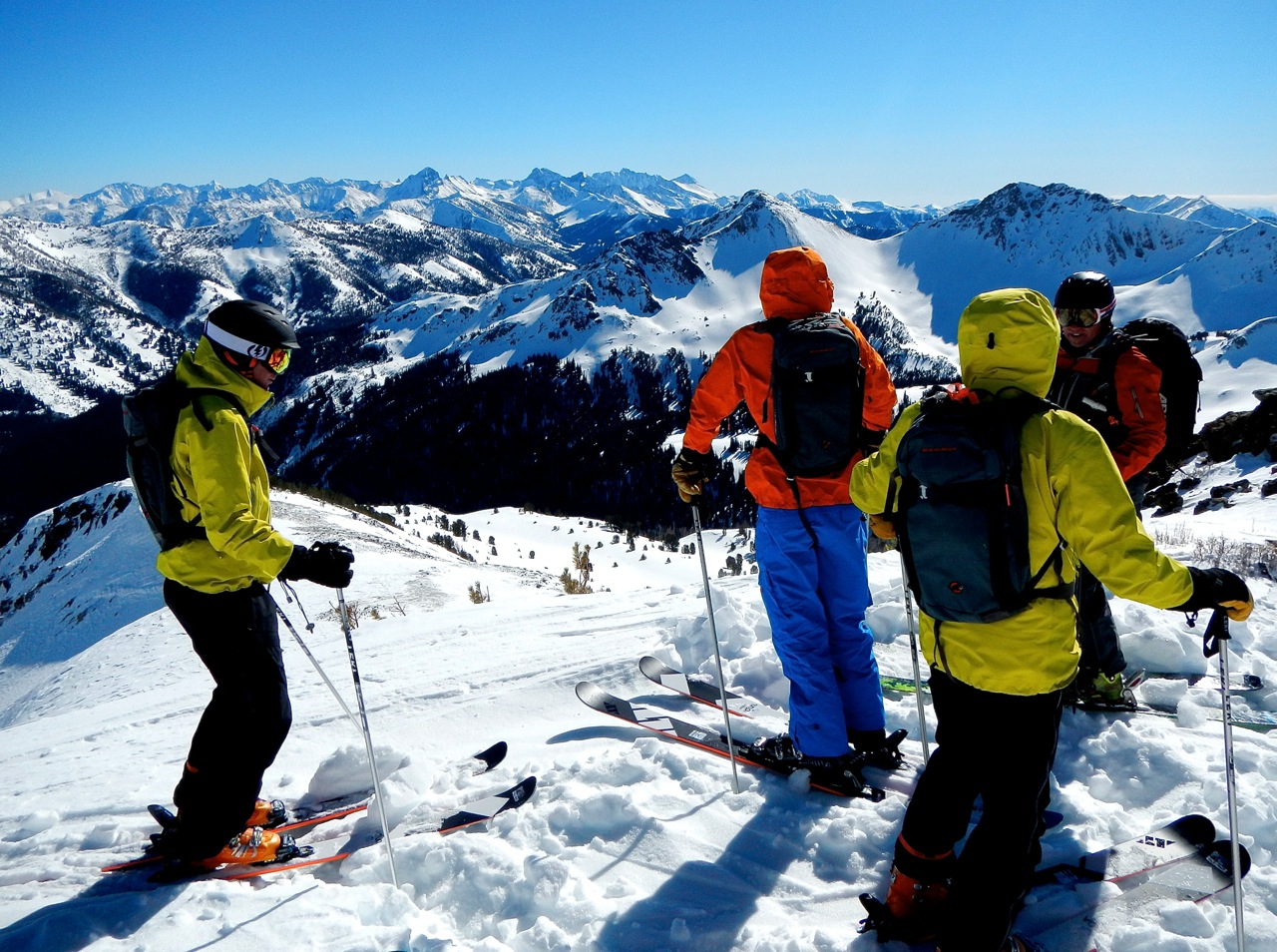 Reggie has been a guide for SVHS for a half-dozen years or so, the big mountain skiing film star is also soon to begin his 19th season guiding heli ski trips in Alaska. While he can claim first ascents at spectacular spots like polar ice caps in Greenland, the Himalayas, the Alps of New Zealand, and the coastal giants of Alaska, Reggie still loves to ski in what has been his big backyard since he was 10.

“Even on a bad snow day, I’m just happy to be out there, seeing it all,” he said. “For me it’s about exploring, getting to ski and see things I never have. Every place is different. You learn every time you’re out there.” 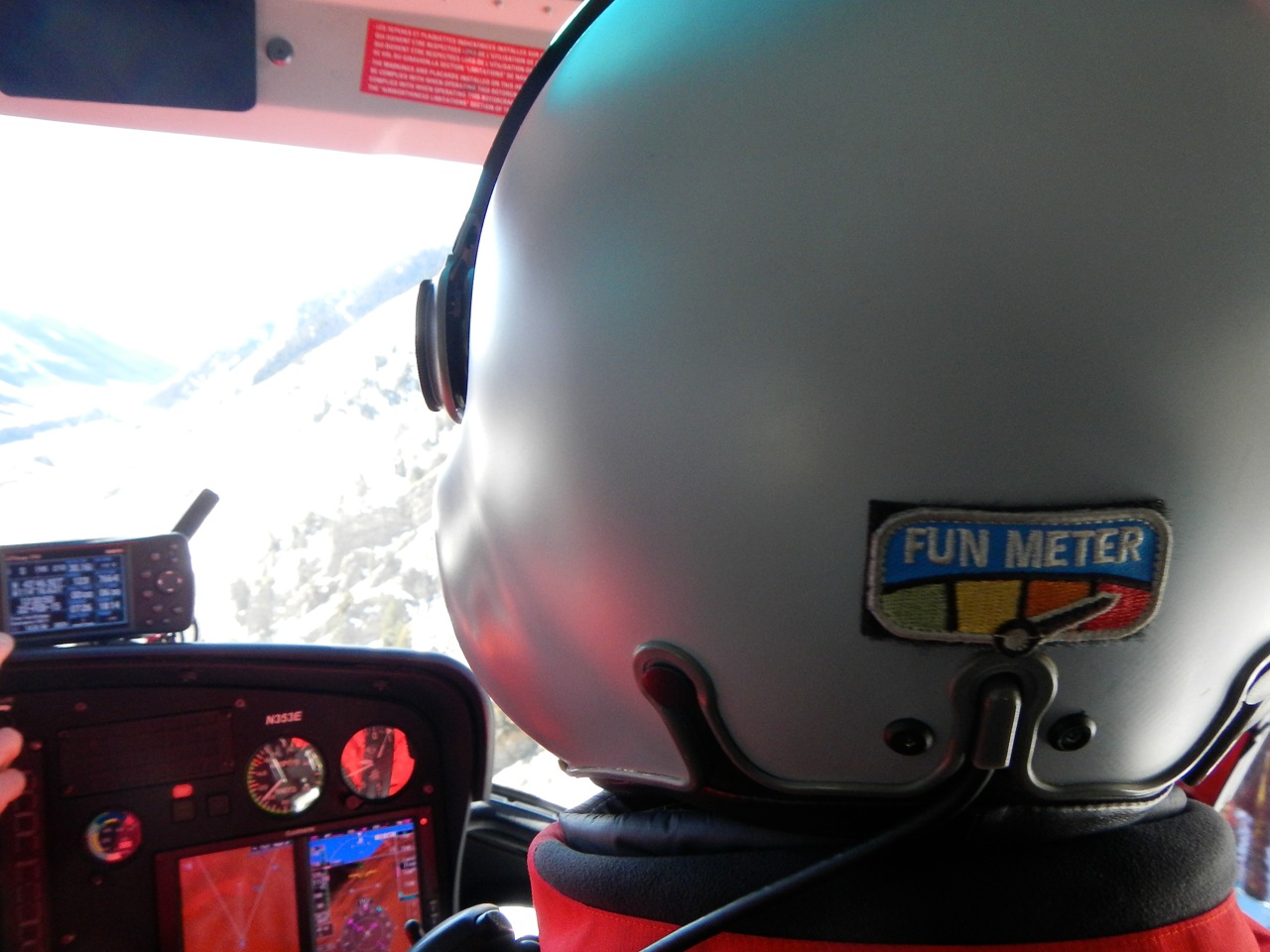 Age and Ability: As Tyler Ferris, the general manager for SVHS, explained, “If you can get down Baldy completely, you can ski with us.” He said they have taken kids as young as his 10 year-old daughter out, and have a regular who is still carving it up at 78.

Conditions: Since Mother Nature doesn’t provide ski groomers, conditions can be a mixed bag, but there are always fresh tracks to be had for the wise and cautious skier or snowboarder. As lead guide Pat Deal reminded us, “It’s the backcountry. There are going to be logs and rocks sticking out somewhere.”

Safety: Before loading the copter and hitting the snow, there is a mandatory half-hour or so safety meeting. The meeting included going over proper usage of avalanche beacons and airbag backpacks, and the importance of keeping your eyes on the helicopter, of not rushing and of the sticking to the buddy system. Procedures for handling an avalanche are also covered. “Safety is very important at Sun Valley Heli Ski,” Pat said.

Gear: Skis and snowboards should be tuned up and in good shape to handle the variety of backcountry terrain and conditions. Powder skis with a width of 95mm are mandatory and can be a lot of fun. It’s always a good idea to wear a helmet.  Avalanche beacons and airbag backpacks—as well as lunch—are provided.

Wildlife: There are occasional terrain closures for mountain goat, elk and wolverine. 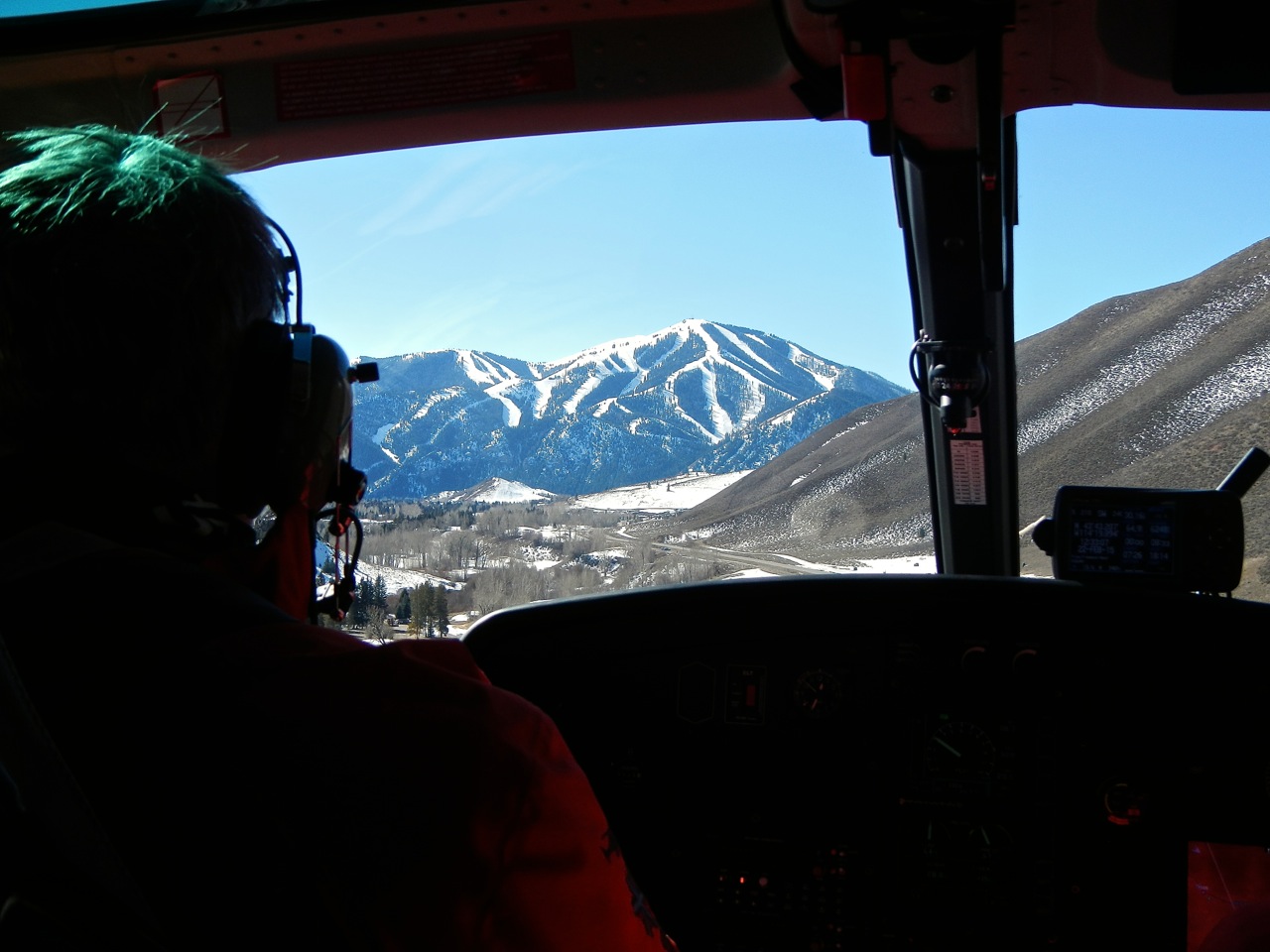 For more information call SVHS at 208.622.3108 or visit their office at Greyhawk Alpine Training Center in Warm Springs.