At first, they were conspicuous by their uniqueness. One of those wacky-looking mountain bikes with the monster tires may have passed you by while you were Nordic skiing, or walking the dog on a crisp winter’s day, or maybe you’d see one leaning by the backdoor of a local watering hole.

But then they started to show up more often, on the snow-covered streets and sidewalks and Nordic trails. Besides their comically large tires, “fatbikes” have not only become prevalent in Sun Valley, but their riders seem to all have one thing in common—they look like they’re having a ball, like they’re cheating the season and happily getting away with it.

Yes, bicycles have long been associated with warmer, fairer weather seasons like summer, but that doesn’t mean bike lovers were content with that. 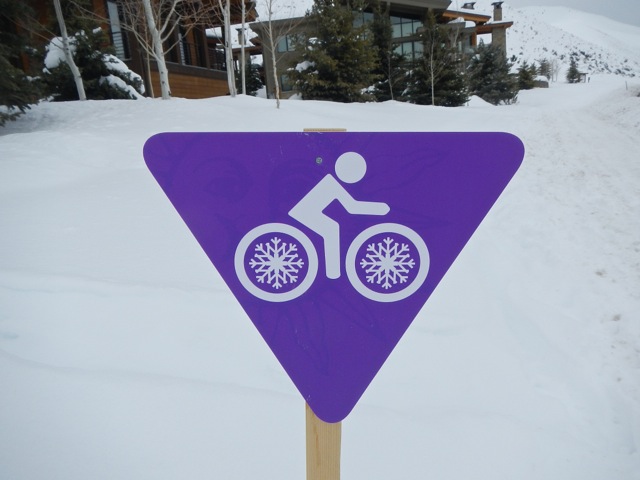 The original attempt at creating a fatbike was for the first Iditabike in 1987. The race challenged riders to travel 200 wintry miles of snowmobile and dog mushing trails across the Alaskan backcountry. Traction was a huge problem and winter tricks, like putting zip ties around the tires or nails through the tread, didn’t work. So some riders would combine two or even three tires (a six-pack) side by side for more traction.

The first fatbike with tires more than 3” thick—more than twice as thick as the normal “fat tire” mountain bikes—was  believed have been created at the turn of the 21st Century. Custom “fatbikes” have been slowly gaining in popularity ever since, especially since 2004, when the commercial fatbikes finally became available.

As easy to use and maintain as a regular mountain bike, fatbikes are good for snow, mud or sand and are the fastest grow segment of the bicycle market. And when you ask anyone who’s ridden a fatbike, from the bike shop mechanics at Sturtos to non-skiing visitors from Utah who came to Sun Valley to peddle on the snow, to Ivana Radlova over at the Sun Valley Nordic Center, they’ll all tell you how fun and easy it is.

“Just about anybody can ride a bike, right?” Ivana said as she showed a visitor from the Beehive State which trails are fatbike approved.

“You can see the draw. It’s fun. It’s pretty easy and it’s a great alternative for people who don’t want to deal with the difficulties of skiing,” said the former Olympic Nordic skier. “It gives another mode for people to get outside and enjoy winter.” 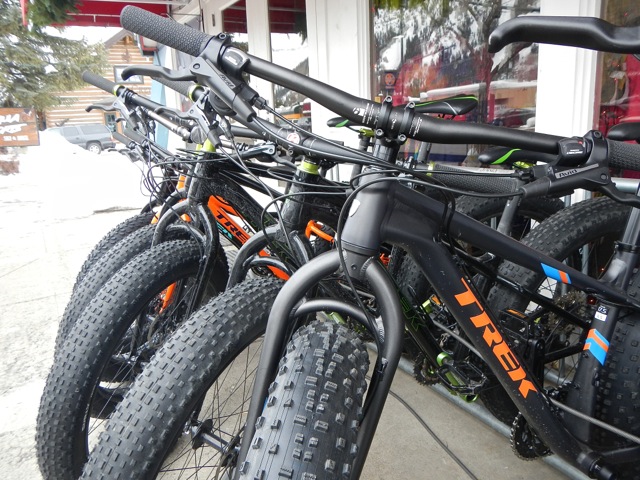 The sport is still fairly new and despite its claims to have less of an impact than even Nordic skis do, fatbikes are only allowed on select trails.

In the Sun Valley Nordic Center trails system, Dog Loop and Boundary Trail are both open to fatbikes. There’s a seven-mile loop by the SNRA Visitor’s Center, a track at the Big Wood Golf Course and fatbikes are allowed on the BCRD Bike Path. All but the bike path require passes. Sun Valley Resort doesn’t have any fatbikes left for rentals this season, but most of the sports shops in Ketchum do.

To kick off this year’s Sun Valley Nordic Festival, the first ever Snowball Express fatbike race took place on a course created along the White Clouds Golf Course. Hundreds of riders showed up and had a blast. It sounds like this race will, much like those in our sister ski towns in Utah and Colorado, become an annual tradition here in Central Idaho.

One of the best parts about winter in Sun Valley is that it’s very welcoming to fans of any winter activity, from snowboarding to Nordic skiing, from fly fishing to snowmobiling, from snowshoeing to après-shopping, even to that growing list of those nutty folks who like to ride bikes in the snow. Our winter wonderland offers something for everyone to do outdoors.